Get fresh music recommendations delivered to your inbox every Friday.

The trouble with Earth is the humans

from People never seem to amaze me by Sven Curth 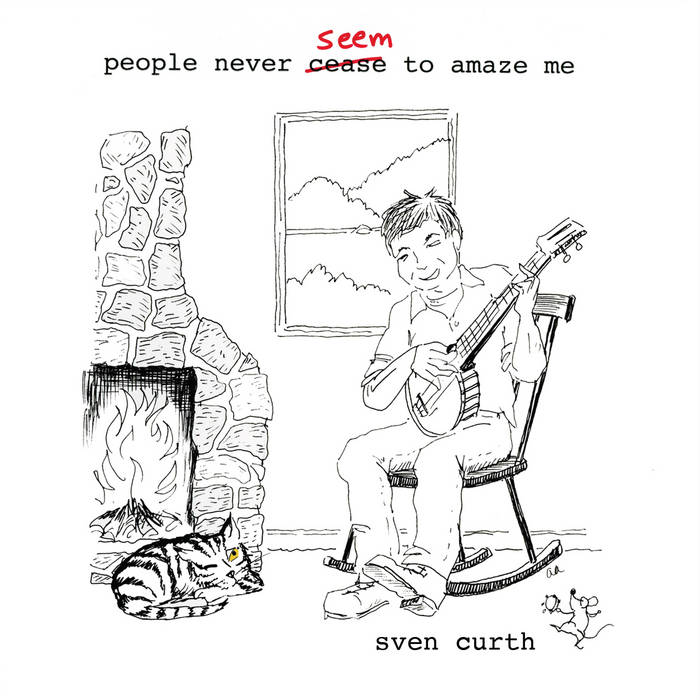 The trouble with Earth is the humans

You know the trouble with Earth is the humans;
They're everywhere and they can't get along
Everything that they touch turns to shit in the end
' Least they'll kill themselves off before long...

Well, you go shopping! You buy some shoes!
Perhaps an electronic gadget that you'll rarely ever use!
Get out in public! Fraternize! Get to know the other members of your hive!
Buy yourself something! Sell it for more!
It's the official, global pastime: Gain and profit; risk, reward!
What's that you're hungry? Why not try food!?
Made up various plants and animals to satisfy your every mood!

You know the trouble with Earth is the humans;
They're everywhere and they can't get along
Everything that they touch turns to shit in the end
' Least they'll kill themselves off before long...


Why do we need to "fit in" so badly? Why are we so dazzled by accumulating possessions? What is the nature of our fascination with entertainment, clothes, gadgets, vehicles, preened houses, manicured landscaping, public affirmation, instant gratification and basically everything we concern ourselves with on a day-to-day basis?

And what a ludicrous joke it is to obsessively engage in the pursuit and maintenance of such mundane trivia when we are such fleeting participants in a such a wildly enormous cosmos.

We find ourselves perched, precariously, on a barely stable chunk of gases and minerals that is hurtling around in an incalculably vast universe for a brief moment in space and time...
…and in the face of such humbling enormity here we are, feverishly exerting all of our combined efforts into generating income, marshaling resources, coupling and reproducing, defending preconceived notions and constantly struggling to elevate our social stature. And cleaning. All independently, but in unison.

Of course, many of us are barely just surviving… desperately scraping together the strength and bare essentials to make it through another day - generally forgotten and disdained by those of us more fortunate - but rich or poor, we consume. Every calorie burned, every breath, every step we take is quite literally at the expense of something else.

And of course, every other living organism does the same, or would if it could.
It's the dichotomy of life - to flourish it must consume. And if it consumes too much it ceases to flourish.

So, like a bacteria, humanity flourishes in a very specific environment for a brief moment in time and space because conditions temporarily meet the incredibly narrow margin of criteria that we require biologically to survive.

And we will continue to survive in this manner until our environment is no longer able to support us, at which point we will either enter a period of steep decline or cease to exist entirely, just like every other living organism and under the same set of rules. Supply, demand. Flourish, consume, deplete, decline. Live and die.

And yet, we regard ourselves so highly! We have sentience!

We prize our sentience as that which sets us apart from any other living organism, and we accept it as a mandate that grants us the unmitigated and inalienable right to creatively and systematically devour every other organism and resource that our planet has to offer in constantly evolving and increasingly efficient ways.

...And it is our sentience that imparts in all of us an obsessively self-centric "pursuit of happiness"; that ineffable and elusive state of mind which truly is our primary motivation for waking up each day.
And that happiness can be manifested in a multitude of subjective ways, but it cannot be satiated. No matter how much happiness we have encountered, we will always pursue more happiness.

At present, in such great numbers, we exist in a proud new era. Never before in human history have so many of us independently, concentrically, and undauntedly flourished and consumed our way toward SO much happiness.

Surely with all of this happiness abounding, we have much to be proud of? But is there actually anything to admire about humanity, from an objective point of view?

At first glance it appears that we're really all just incredibly busy at pursuing our own interests. We're all just consumed with WANTING and NEEDING. We can't even conceive of not keeping ourselves relentlessly in pursuit of these two initiatives.


So, what is it that we are so busy doing to fulfill these wants and needs?

It would seem that we, and every other form of life as we know it, exist to seduce each other, produce offspring, build ourselves some kind of comfortable life, and then desperately defend it all from each other and everything else. Procreation and survival. Sex and Violence.

Add to that our boundless craving for attention, acceptance and respect from our peers and we've really got our work cut out for us. Blind ambition for the sake of personal fulfillment defined by social approval. It seems a bit silly, at best. Infinitely destructive, at worst.
Given that we are unlikely to evolve out of being a species of violent, sex-crazed, delusional lunatics blindly following rules of our own making any time soon, it is not precisely clear which qualities in humanity as a whole that an objective observer might find engaging. Perhaps entertainment value. More likely as a scourge to be feared and hated.

At any rate, our endearing qualities would most certainly not be our frantic and insane clinging to the desperate illusion of order, structure, and control within our staunchly-defended ideological systems. Nor would they include our mechanized uniformity and hopeless addiction to social affirmation.

We seem to be utterly helpless without the scrutiny of each other. Our lives, pursuits, accomplishments and shortcomings are only worth what others see in them.
And those others' views are only worth how they appear to others yet. And so on to infinity.

Any aberration from the interests and pursuits that society around us considers viable is not "normal".
The perpetrator is then labeled "sociopathic". A hater of society. A threat to the sanctity of the hive.
After all, we're social animals. Like ants. And bees. And Lemmings. And everything alive. So much for sentience setting us apart.

Its nice to think that a truly sentient individual could challenge every precept that human beings revere and pursue as "normal". That every person should and would question, without exception, ALL of our institutions, traditions, trends, habits, customs and protocols. Anything that we do because, "that's just how it's done". Anything that is accepted without scrutiny. Anything that is done because "that's how we were raised" or because "others are doing it". Anything that is undertaken based on guilt, responsibility, obligation, duty, or ideological purpose without any critical thinking. Any truth we take for granted.
But honestly - that's just too much work...

If sentience is our most treasured aspect as a species, it is largely squandered on us. We're too busy going through the motions of what is expected of us. By us. We are completely consumed by admiring or despising some of us and being manipulated by others of us, while rigidly adhering to the examples of those of us who have lived in the past. All of whom did the exact same things as us. We are our only significant predator, and we fiercely defend ourselves against: us.

At the end of the day it's difficult to find any objective redeeming qualities in humanity. Its not that we've possibly got a few things wrong, but that we may have almost nothing right. And maybe that is just what we are. Self-obsessed and destructive. There are no solutions or remedies. We are not good or bad. We just are.

Ultimately, I don't have a shred of confidence that there is the slightest hope for the longevity of our species. Something so vulnerable and simultaneously malignant must eventually destroy itself, or succumb to external pressures. And perhaps that's ok. Enjoy it while it lasts, I say - because as far as I can tell the future cannot, and probably should not, include us.

Although I could be wrong.

Bandcamp Daily  your guide to the world of Bandcamp

Little Brother joins the show to discuss their beautiful journey, plus tunes from Fat Tony